Mississippi has one of the highest rates of heart failure in the United States—higher annual death rates than any other state.

Researchers from the Cleveland Clinic and Emory University found that between 1999 and 2019, Mississippi had an average of 7.98 heart-related deaths per 100,000 residents — the worst rate in America.

The Magnolia State’s neighbor to the east, Alabama, came in second, with a significantly lower 5.24 per 100,000. Minnesota has the lowest rate of heart failure, with 1.09 per 100,000 population – just 13 percent of Mississippi’s total.

The South has long been known by health officials to have an increased incidence of cardiovascular disease due to poor diet, sedentary lifestyles and high levels of poverty. The top ten states for heart disease deaths are all in the southern United States.

Mississippi has the highest rate of heart failure in America, with nearby states like Alabama, Arkansas, Louisiana, Oklahoma and South Carolina reaching half its rate.

The researchers, who published their findings Wednesday in the journal JAMA Cardiology, collected data on 61,729 heart failure deaths in America between 1999 and 2019.

They then adjusted the data for age, so older populations, who are more at risk for such conditions, did not weigh the data.

Mississippi is far and away the leader, and experts on the issue have been warning for years.

Issues related to heart failure, such as obesity and high blood pressure, are more common in the South than in other regions of America.

People who suffer from these chronic issues generally fare worse in the Magnolia State because it has one of the worst health care systems in America.

But it’s not just Mississippi. Heart disease has plagued much of the South in recent decades.

Alabama, which shares a western border with Mississippi, has the second highest rate of heart failure, with 5.24 deaths from the disease per 100,000 residents every year.

The ten countries with the highest rates of heart failure

The ten countries with the lowest rates of heart failure

“One in four Alabamians are obese and have high blood pressure. We are one of the worst performing states nationally when it comes to cardiovascular risk factors.’ Dr. Pankaj Arora of the University of Alabama-Birmingham spoke about the state of his state last year.

Only three other US states have a rate of four deaths per 100,000 residents, and all are in the South.

Arkansas and Louisiana, located on the Mississippi’s western border, rank third and fourth with 4.87 and 4.85 deaths per 100,000 residents, respectively.

America’s healthiest hearts appear to be concentrated in the Midwest and Northeast regions of the country, researchers have found. 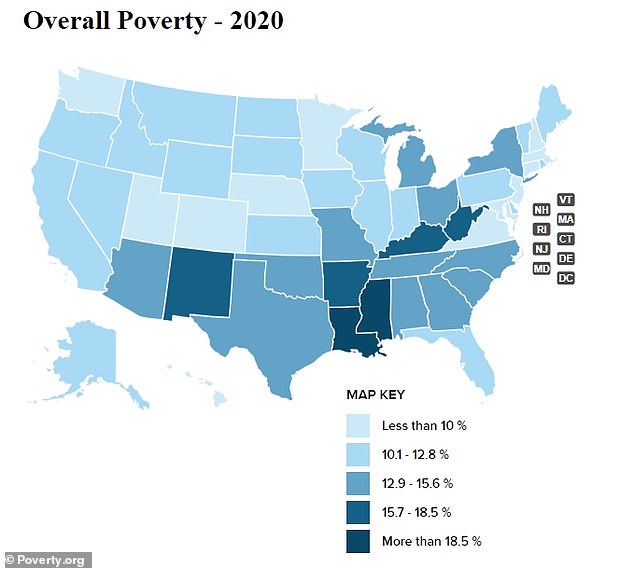 Heart failure rates in America are closely related to poverty rates in each state, with wealthier states mostly in the Northeast and Midwest and poorer states in the South.

They are also unable to get the medicines they need to treat their health problems.

A 2019 report from the National Institutes of Health also found that many poor people experience more stress than their wealthier peers, which can have a major impact on their health over time.