Mike Dyson, 33, died suddenly on Christmas Day after a few drinks before opening his presents.

Dyson went to a neighbor’s house for a drink at 1:30 p.m. After drinking four glasses of whiskey and some hot water, he went to bed. Everyone thought he was sleeping. Around seven in the evening, her family members and neighbors were shocked to see her not breathing. So they called an ambulance and gave him artificial respiration at the same time.

The coroner confirmed that he died of central nervous system depression, specifically respiratory depression caused by severe alcohol intoxication. A toxicology test showed that Dyson’s blood alcohol content at the time was extremely high, four to five times the legal driving limit, which equates to “extreme intoxication in a normal person”.

Dyson’s story is just one example of countless alcohol-related deaths. The harm of alcohol is more common than we think.

Did you know that there is no such thing as “safe drinking”?

Alcohol has long been classified as a Group I carcinogen by the International Agency for Research on Cancer (IARC).

In 2018, The Lancet, a top international medical journal, gave alcoholics a bitter pill. After a systematic review of alcohol consumption and health effects in 195 countries from 1990 to 2016, this study concluded that the safe intake of alcohol is nil.

According to the study, statistics show that in 2016, one in three people over the age of 15 drank alcohol worldwide, including 25 percent of women and 39 percent of men. Alcohol consumption is the leading cause of premature death and disability in people aged 15 to 49 years.

Many believe that drinking red wine is good for your health. In fact, this is mainly due to the presence of resveratrol in red wine. You can also get resveratrol from red or dark red grapes, blueberries, cranberries, and peanuts without drinking alcohol. You can also drink a glass of rich grape juice instead and benefit from the resveratrol content without the negative effects of alcohol.

In addition, alcohol consumption is directly related to the increase in cancer and infectious diseases. Thus, given the overall health effects of alcohol consumption, the previously reported protective effects are negated. No matter how much alcohol we drink, our health will suffer. And our exposure to alcohol also has a negative impact on our health at different stages of our life cycle. 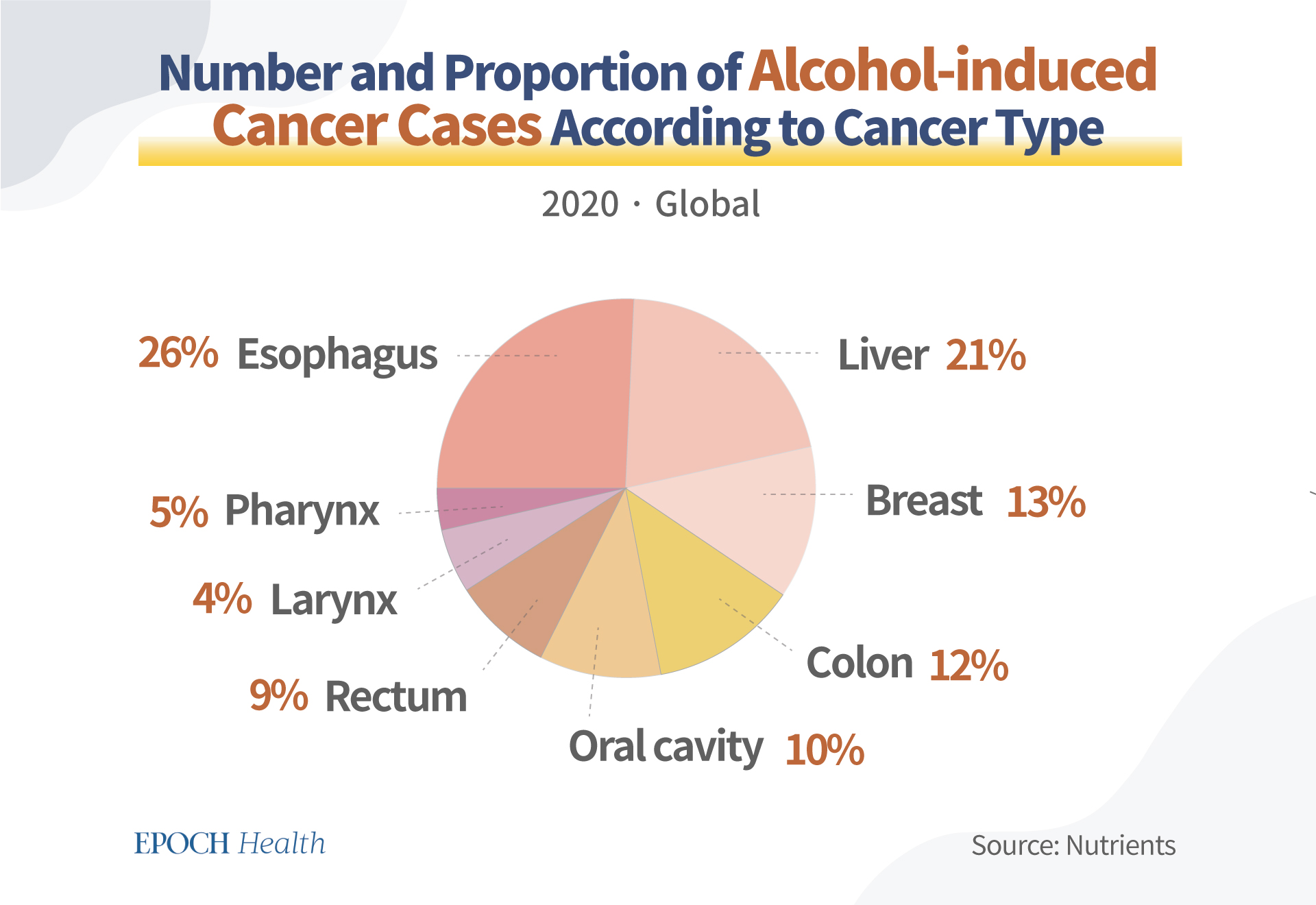 How much alcohol can the liver process?

After drinking alcoholic beverages, alcohol is absorbed into the blood, further broken down and processed by the liver.

A person can become intoxicated if they drink alcohol faster than their liver can process it.

In the United States, the legal blood alcohol concentration limit for drivers 21 and older is 0.08 percent.

If BAC is from 0.08 percent to 0.4 percent, a person is considered intoxicated. Other symptoms may include confusion, nausea, and drowsiness.

A BAC above 0.4 percent is very dangerous and can cause serious complications, coma, and even death.

Alcohol causes brain atrophy and increases its lifespan by 11.7 years

The link between alcohol consumption and brain atrophy was discovered decades ago.

Many magnetic resonance imaging (MRI) studies have shown significant differences in the gray and white matter of the brain in chronic alcoholics compared to healthy individuals.

Gray matter in the brain of alcoholics generally decreases in volume, and the degree of change is related to the amount of alcohol consumed over time and the duration of alcohol dependence. In alcoholics, the white matter of the brain atrophies and its microstructure changes. 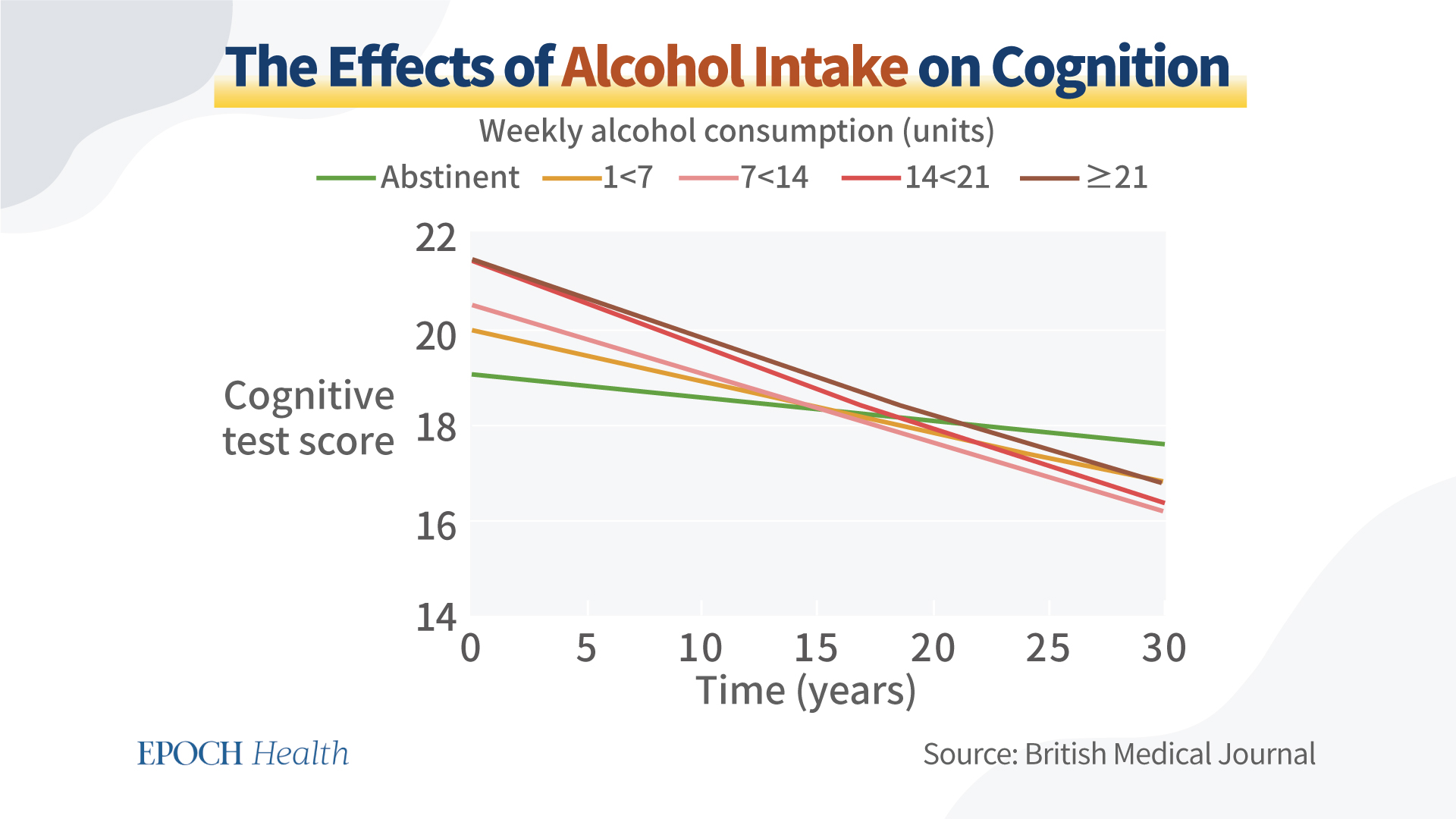 The degree to which alcohol shrinks the brain increases with age and reaches a maximum in old age.

However, the reduction in brain volume is not necessarily reversible, and many early studies have shown that brain volume partially recovers after abstinence from alcohol. In former heavy drinkers (155 drinks per month), reducing alcohol consumption to an average of 20 drinks per month is sufficient to increase brain volume.

Alcohol also causes brain aging. Alcoholics have larger brains than their peers. One study found that the difference between brain age and biological age of alcoholics, as measured by gray matter volume, was up to 11.7 years. Another study on brain age found that only daily drinkers had a difference between actual and predicted brain age, while those who rarely drank or abstained from alcohol did not.

What parts of the brain does alcohol affect?

When alcohol enters the brain, it affects the following parts of the brain:

Hippocampus: This is the part of the brain that creates memories. A glass or two of alcohol can cause temporary “amnesia”. When alcohol damages someone’s hippocampus, the person’s memory becomes impaired.

frontal lobe: Alcohol damage to this part of the brain can cause a person to lose control, act recklessly, and even become violent. Chronic drinking can permanently damage the frontal lobe.

cerebellum: It coordinates the body. When you are drunk, your hands shake and you walk crookedly.

Hypothalamus: After drinking, blood pressure rises, body temperature drops, heart rate slows down, and urinary control is impossible because the hypothalamus is affected.

Marrow: It controls the body’s “automatic” functions, such as heart rate and body temperature. So drinking too much alcohol can cause you to lose consciousness or even die.

Alcohol reaches the liver and becomes carcinogenic, increasing the risk of many cancers

Only 10 percent of the alcohol we drink is excreted through sweat and breathing, while the remaining 90 percent is metabolized in the liver.

Acetaldehyde is toxic and carcinogenic, while acetic acid is less toxic. An improper ratio of alcohol-degrading enzymes in the body can cause these toxins to accumulate in the body.

Acetaldehyde also damages cell membranes, causing DNA damage and preventing DNA synthesis and repair, which can lead to cancer. Both ethanol and acetaldehyde disrupt DNA methylation, activating oncogenes and other abnormal genes, resulting in the formation of cancer cells. Ethanol can also cause DNA damage, causing inflammation and oxidation.

Of the new cancer cases worldwide in 2020, more than 740,000 were linked to alcohol consumption, with 100,000 of those attributable to light and moderate drinking.

Esophageal, liver and breast cancer are the three most common cancers. The rest are, in descending order, cancers of the colon, oral cavity, rectum, pharynx, and pharynx.

Several Australian researchers conducted a systematic review of more than 100 papers and concluded that excessive alcohol consumption can damage all parts of the gastrointestinal tract. It is now believed that alcohol causes breast cancer by increasing the level of sex hormones in the body.