PARIS, France (AFP) – Scientists spent an hour on Wednesday restoring blood flow and cell function in the bodies of dead pigs in a move experts say should update the definition of death.

The discovery has raised hopes for future uses in human medicine, which could soon help organs function longer and save thousands of lives around the world in need of transplants.

However, it could also raise debate about the ethics of such procedures, especially after some dead pigs suddenly moved their heads during the experiment, startling scientists.

In 2019, a team from the US-based Yale University stunned the scientific community by restoring cell function in the brains of pigs hours after they were decapitated.

For the latest research, published in the journal Nature, the team tried to extend this approach to the whole body.

They stopped the blood flow through the bodies by arresting the hearts of anesthetized pigs.

This deprives the body’s cells of oxygen, and without oxygen mammalian cells die.

The pigs then sat dead for an hour.

The scientists then injected the bodies with a fluid containing the pigs’ own blood, as well as a synthetic form of hemoglobin, the protein that carries oxygen in red blood cells, and drugs that protect cells and prevent blood from clotting.

Blood began to circulate again and during the next six hours of the experiment, many cells began to function in vital organs, including the heart, liver and kidneys.

The study’s senior author and Yale University researcher Nenad Sestan told reporters, “These cells were functional after a few hours — indicating that the cells can be stopped from dying.”

Lungs donated as part of a 2013 study at the University of North Carolina at Chapel Hill sit inside the machine as they are ventilated and screened for transplant in 2013. (AP/Allen G. Breed)

Anders Sandberg of Oxford University’s Institute for the Future of Humanity says OrganEx could also enable new types of surgery because it creates “more medical flexibility in situations where there is no circulation to fix something.”

This technique can also be used to resuscitate people. But that could raise the risk of putting patients in a position where they can’t survive without life support — a so-called “bridge to nowhere,” says Brendan Parent, MD, a bioethicist at the NYU Grossman School of Medicine. A comment linked in kind.

Can death be treated?

Sam Parnia of the NYU Grossman School of Medicine said it was “really amazing and incredibly important research.”

It showed that death is not black and white, but rather “a biological process that can be treated and reversed hours after it occurs.”

Benjamin Curtis, an ethical philosopher at Nottingham Trent University in the UK, said the definition of death may need to be updated because it is tied to the concept of irreversibility.

“This study shows that many processes that we think are irreversible are not, in fact, irreversible, so that according to the current medical definition of death, a person may not actually die until several hours after bodily functions cease,” he told AFP.

“In fact, if we believe the current definition is correct, there may be ‘undead’ bodies in morgues right now.”

Almost all of the OrganEx pigs made vigorous head and neck movements during the experiment, said Stephen Latham, a Yale ethologist and study author.

“It was very surprising to the people in the room,” he told reporters. 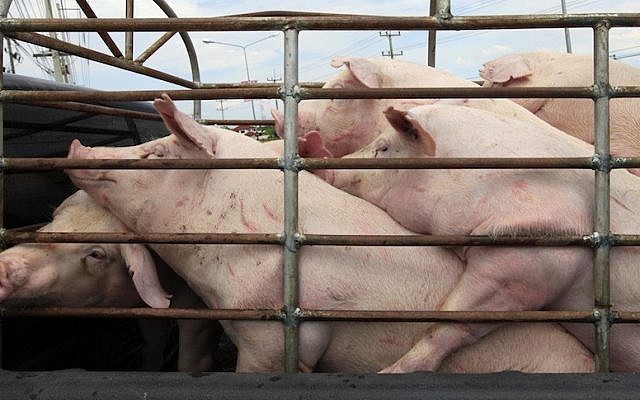 Although it is not clear what caused the movement, he emphasized that no electrical activity was recorded in the brains of the pigs, indicating that they never regain consciousness after death.

In the case of the EEG machine, which measures brain activity during the movement, there was a “little pop,” Latham said it was probably caused by head movement affecting the recording.

But Curtis said the move was a “huge concern” because recent neuroscience research suggests that “conscious experience continues even when electrical activity in the brain cannot be measured.”

“So this method could actually cause pigs to suffer, and if used on them, humans could suffer,” he added, calling for more research.

Supporting The Times of Israel is not a transaction for an online service like a Netflix subscription. The ToI Community is for people who care like you general welfare: Providing free, balanced, responsible coverage of Israel around the world.

Of course, we’ll remove all ads from your page, and you’ll have access to awesome Community-only content. But your support gives you something even deeper: a sense of pride in joining something really important.

Join the Times of Israel Community Have you joined our Community? Sign in to stop viewing this

That’s why we started the Times of Israel ten years ago – to provide discerning readers like you with must-read material about Israel and the Jewish world.

So now we have a request. Unlike other news agencies, we have not set a fee. But because the journalism we do is expensive, we invite readers who have become important to The Times of Israel to support our work. Times of Israel Community.